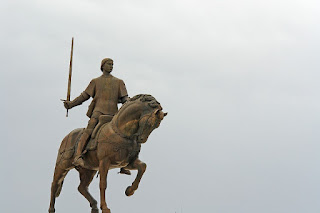 (Part II)
Well, it seems we have a potential winner for the current challenge! (mentioned in our post from 5 December).


Peter guessed correctly the names of 3 scientists that worked of the V1 and V2 rocket projects.
However, there is one thing missing before the winner can be declared for all legal purposes. Peter has to prove he is from , since that was one of the conditions for participation in this particular challenge.
Peter: you can do it in any way you see fit, since we will take your word on that.
My suggestion for a sure way to prove it would be for you to send a few girls to participate in our already famous Christmas lunch!
And now we must go on with NAP’s story!
(The crisis of 1383-1385)
Most sensible people do not start a war when they do not have a fair chance at winning it.
If we take this for granted, then we will have to conclude that the Portuguese King D. Fernando (the First) was not a sensible guy. From 1369 onwards, D. Fernando picked several fights with (1369-1370; 1372-1373 and 1381-1382) and pretty much lost them all. At one time, he had to promise, in the formal Treaty of Alcoutim ( in 1371) to marry a Castilian princess in order to get rid of the Castilian threat.
However, in his usual fickle way, he forgot all about that the moment he set his eyes on Leonor Teles, as I mentioned in my last post. And that, sure enough, brought about a new war with , since King Enrique (the Second) did not take that deception lightly.
The main problem with D. Fernando was that he was a lover, not a fighter. The kind of guy that (as I imagine) said to his soldiers: “go on and kill those Castilians! I will join you as soon as possible!” (and never did) does not exactly inspire uncommon bravery among his troops. We have a popular saying over here in Portugal that goes more or less like this: “a weak King weakens the strongest people” (it sounds better in Portuguese…), and D. Fernando was not a man for medieval times, where the rule of Force was more important than the rule of Law. Because of that and as a rule, in his time the Portuguese medieval levies were usually defeated in battle. I say “because of that” with intent, since a couple of years after his death those same levies, while outnumbered, performed wonders of valour under different leaders, as you will notice latter on.
When D. Fernando died, on 22 October 1383, the Kingdom was more or less in shambles and with his death ended the rule of the dynasty of in , since he did not leave any offspring.
Queen Leonor was appointed regent on behalf of the daughter of King D. Juan (the First) of , and set her mind, with the help of her Galician lover Count Andeiro, to deliver the Portuguese throne on a silver platter to .
Maybe she thought this would be the only way to guarantee her own survival, since she was very much hated throughout the Realm – and she was right about that.
However, there were guys over here that did not quite agree with the way things were going and decided to do something about it.
NAP was one of them.
And now the stage is set.
In my next post (scheduled for the near, but not quite defined, future) of this wonderful Series, NAP will set his foot in it.
PC
Publicada por Jorge Faria à(s) 09:01