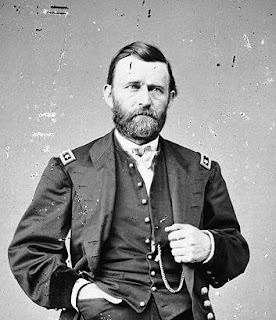 (Ulysses S. Grant)
I received several complaints from our huge following from the North Pole related to my last post, hinting that it was not fair to only promote generals from the "South", concerning the current poll.
And since over here we want to give everybody a fair chance to win, here is a post related to a couple of generals from the "North".
Now I know why Grant has few votes - I typed his name incorrectly in the poll (Ulisses instead of Ulysses), and people have not been able to identify him because of that.
At a time when everything look hopeless for the Union, since it's superiority in men and materiel was not reflected in favourable results, from 1863 onwards Grant gave the North new hope by providing the essence of war: Victory.

(William T. Sherman)
When you look at Sherman you cannot make a mistake: he looked like a tough customer and he was a tough customer.
His "March to the Sea" was a good example of one of the things that get the job done in war: merciless destruction of your enemy's resources and hability to fight.
"War is cruelty and you cannot refine it" - these wise words of his should be remembered before starting any war.
PC
Publicada por Jorge Faria à(s) 16:49