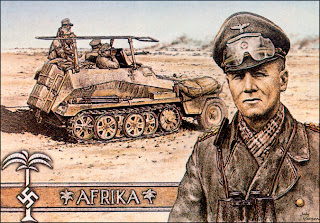 That's right folks, we have a WINNER!
The "Desert Fox" did it again!


As I predicted (...), your votes gave this guy a narrow win over some pretty tough opponents. Right until the last days, there was no telling if the final victory would be his or Manstein's. One of these days Rommel will be portrayed in the (wonderful...) Character Series posts, as it is only deserving.
My next poll will be about the generals from the American Civil War. We will see if there is someone with half a chance at snatching the victory trophy from Robert E. Lee's hands - not that I have any particular favorite on that regard, mind you.
Speaking of challenges: it seems the guys from New York will not be able to cut it.
The challenge made in my post from 11 December is still unanswered. Will victory belong, once again, to the Brigada Tripeira guys?
In order to avoid that, I will "open" this challenge to other parts of the World, in order to provide the New Yorkers with some (needed...) assistance.
Therefore, our followers from the North Pole will also be able to place answers in the current challenge (do not tell me later that I was not helpful).
PC
Publicada por Jorge Faria à(s) 15:55