Well guys, I have to tell you the honest truth: I lost count of the number of posts related to WWI, therefore I am unable to place the series number on this one.


But, once again, this is JF's fault!


This guy, is employed in the civil service - and it's a given fact that he has little or nothing to do all day.

Therefore, he surely could put to good use all the available time he has, and trace back all our posts in order to figure out the status in every series.

Come on dude, think of this as the exercise you are always planning to do, but never get around to it... 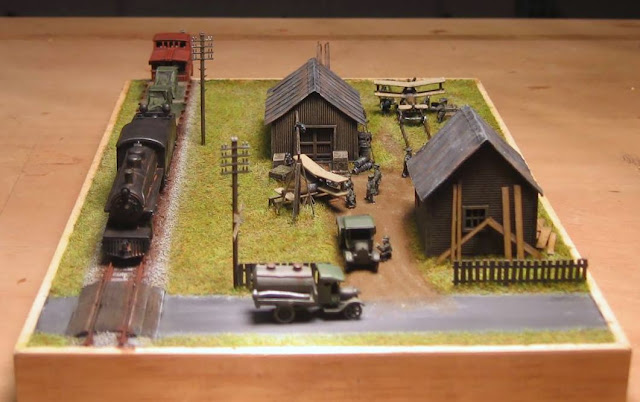 In a CB dio you are always sure to get a bonus treat, since he usually places something that you have never heard before.

Be honest now: which one of you guys has ever heard something about the "Kettering Bug"? 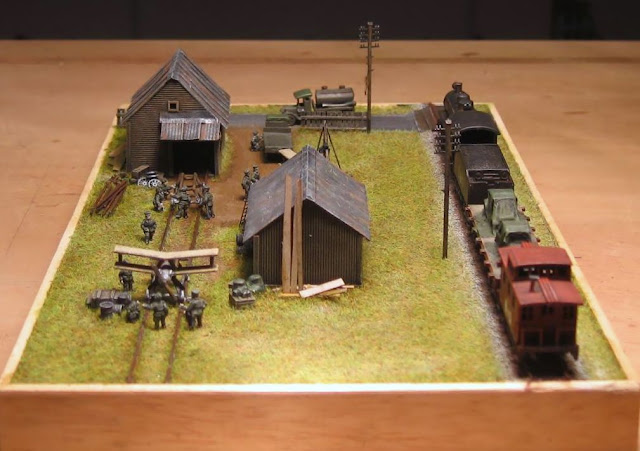 I know for a fact that (besides CB...) I am the only one that knows something about this piece of hardware, that was almost used in WWI (I didn't even had to resort to wikipedia for this...not too much anyway...).

This "Bug" was designed to deliver about 80 kg of explosives to the enemy by remote control, during WWI.
(now you know who the drone's great grand father was)

Given the fact that there was a heavy risk of placing ordonnance transported by this little bird on allied troops, somebody had the good sense of never actually using this stuff in combat.

However, a guy has to wonder where this sudden concern for the welfare of the troops came from, since the "guys in charge" during WWI never had any worries about sending thousands upon thousands of soldiers against well entrenched machine guns...


The Big Boy is out again!

That's right, this time it is the "Loki" who came over to visit the us, as an excuse to show CB's expertise in miniature modelling. 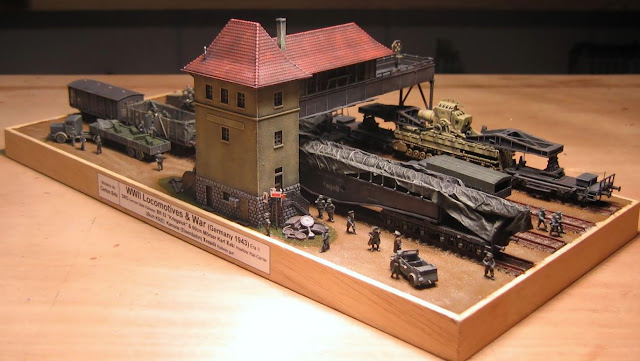 As everybody knows, "Loki" was the name of a god from norse mythology, famous for his mischievous deeds, and it seems a proper name to give a railways gun that was surely "born" to spread mischief - in many ways... 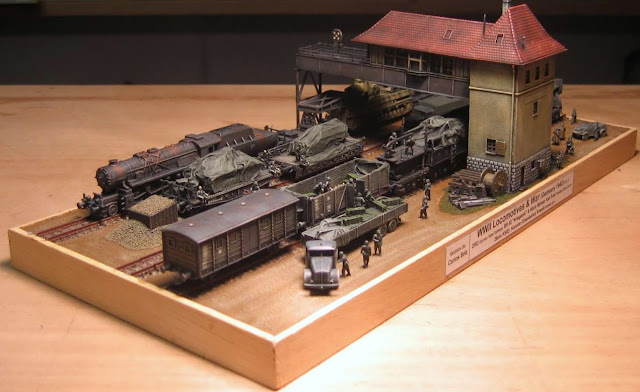 This is another pic that turned out really well.

I just wished JP could take a few hints (and a couple of lessons...) from CB, when it comes to taking modelling pics. The best pic he placed in his blog until now it is not even his - its from that nice girl Soraia. 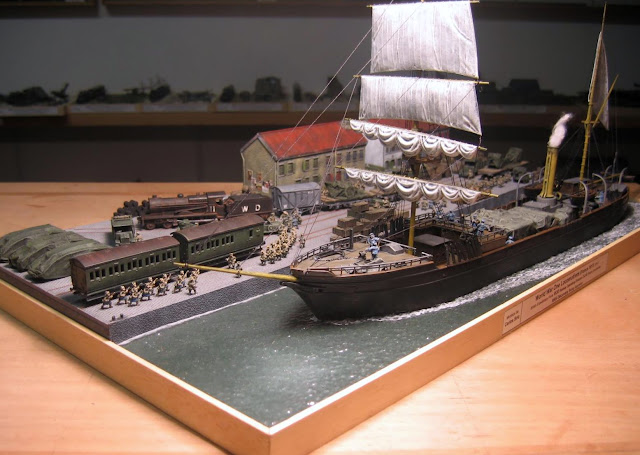 
Here you have it, again!

That´s right guys, seeing it, is believing it: here you haver another monster-of-a-dio, brought to you by the one and only CB!

This is another massive dio, that includes another great steamship and an awsome loading dock scenario, this time related to WWI. 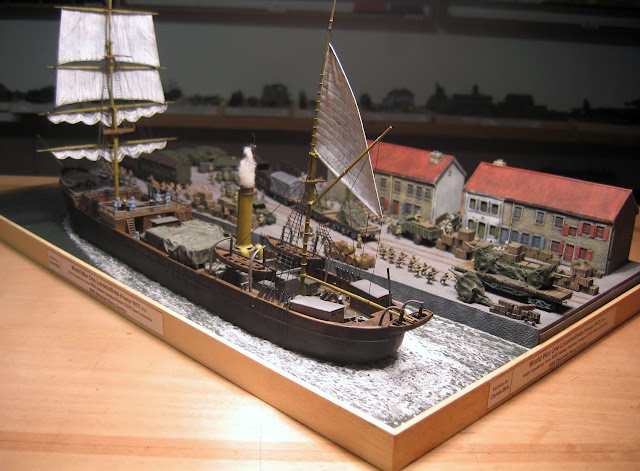 Steam and sails: who knows, maybe sooner than expected this will be trendy again, given the constant rise in the price of oil... 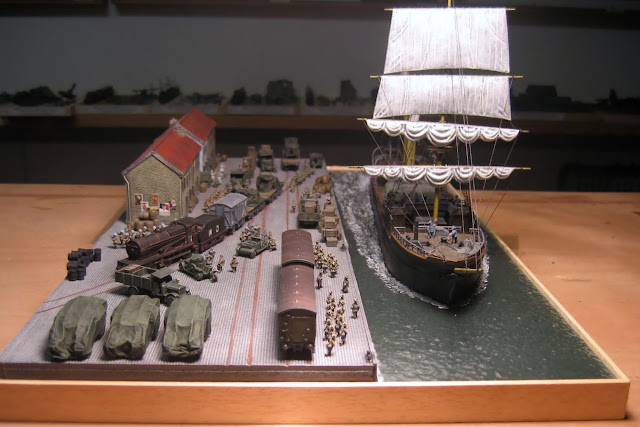 Squeaky clean dock, you say? Nope, it was just fresh cleaned before the arrival of this ship... 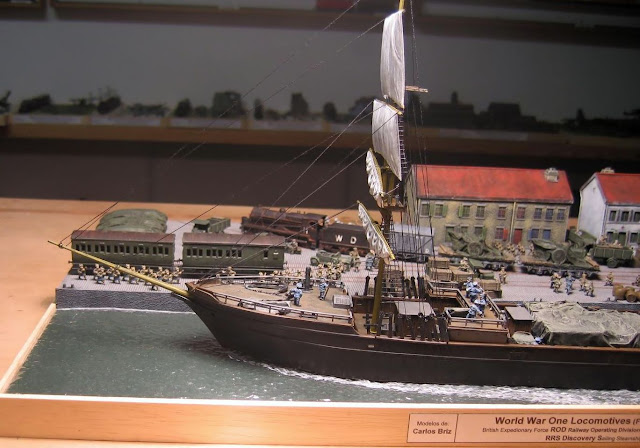 CB is a master in any modelling challenge! 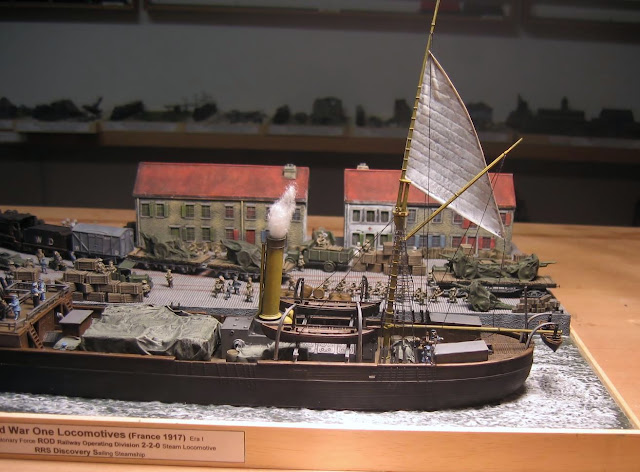 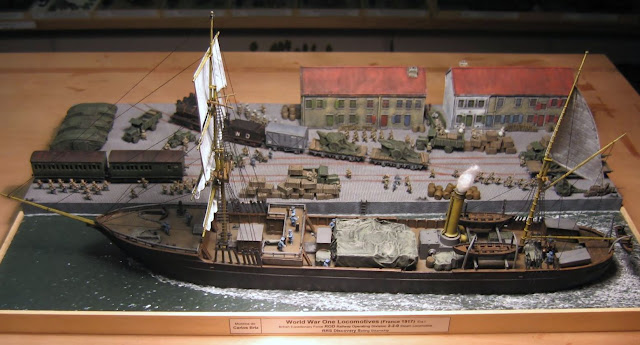 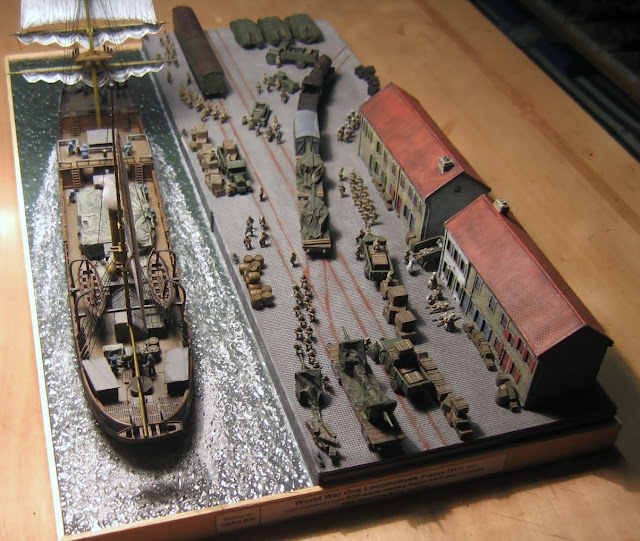 This was also another dio that CB brought to Espinho for our most recent get-together, and it really looks impressive!

Guess again, if you dare think CB has taken a break after this massive work of art.

There are many more on his drawing board, that sooner than latter will see the light around here. 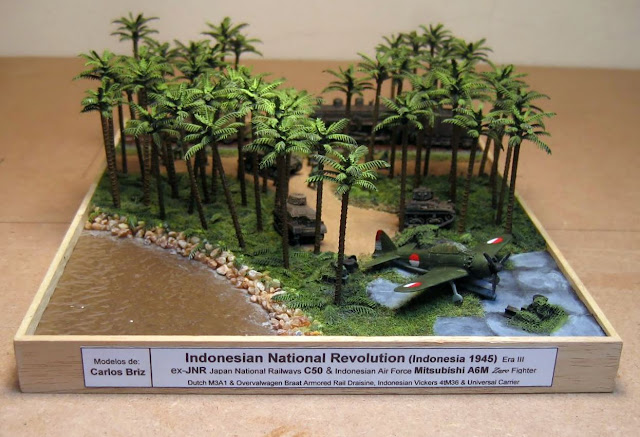 
Here are the palm trees I told you about! 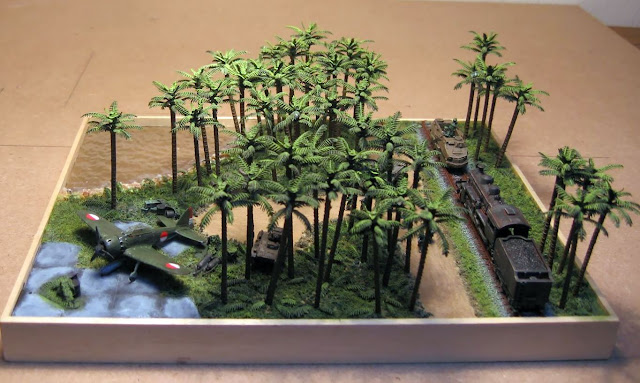 And here is the final result!

This is one of the dios CB brought with him to the Espinho modelling event, and it sure looked good.

The Indonesian War of Independence was, like so many others, a direct result of the many surplus weapons made available by WWII, to several independence mouvements around the world.

In this particular case, the war lasted about 4 years and, as usual, resulted in much bloodshed, mainly among the civilian population. 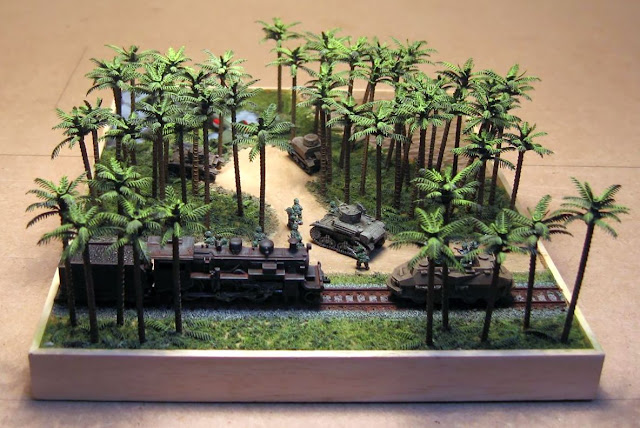 ﻿
Feast your eyes on this, since there are a lot more coming up! 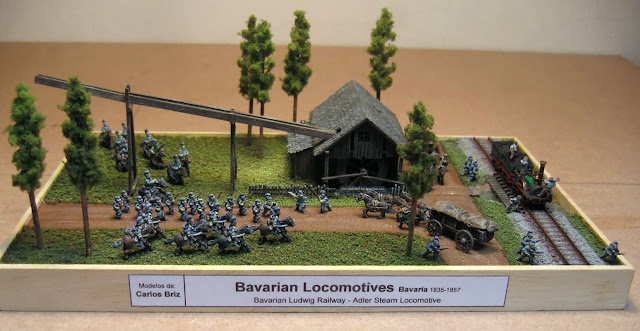 
Horse power all the way!

CB brings us another great dio, this time related to a XIX century Kingdom, that had a time limit on its existence - Bavaria. 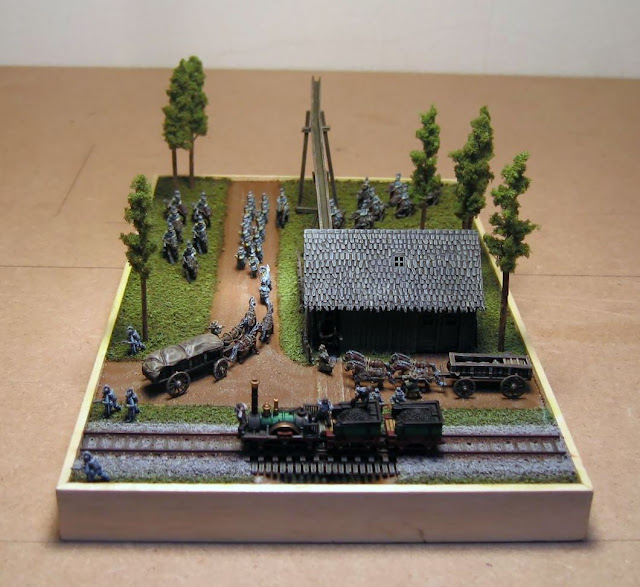 The Kingdom of Bavaria was a product of Napoleon's fertil imagination, that brought it to existence in 1806, arranging things in a way to have it supply him with men and ammunition, and support him in his never ending wars. 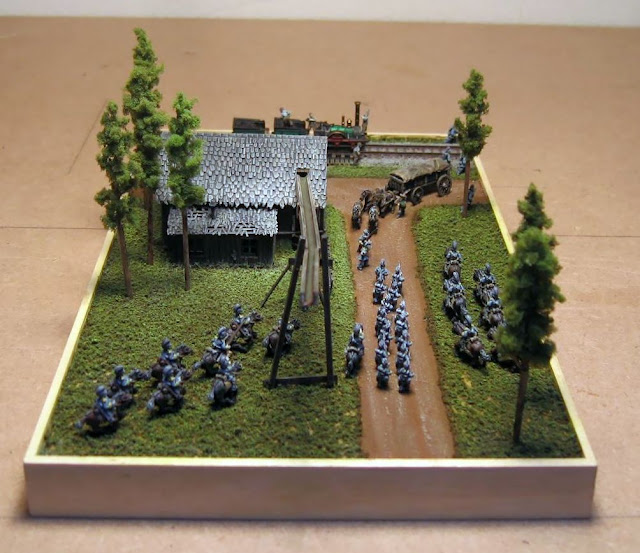 After the Franco-Prussian war of 1870, during which it was Prussia ally, Bavaria joined the federation know as the German Empire. After that, it was just a matter of time until it became absorbed by the German juggernaut. 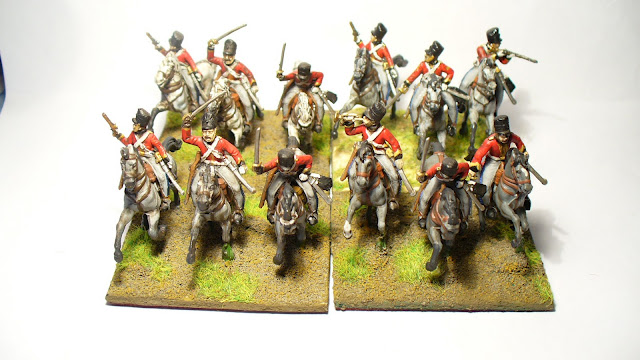 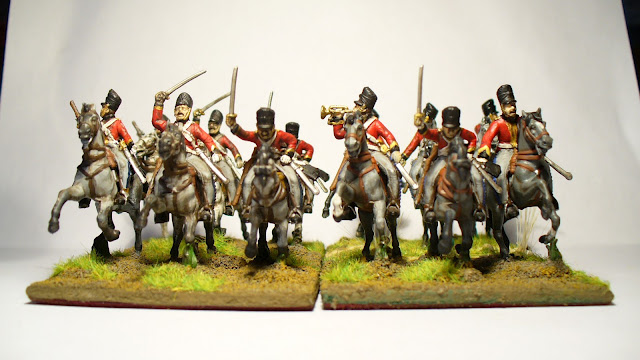 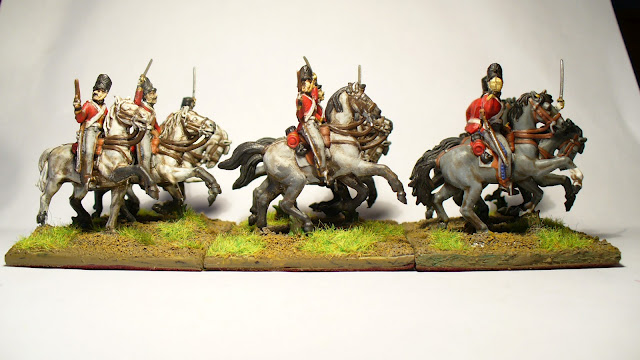 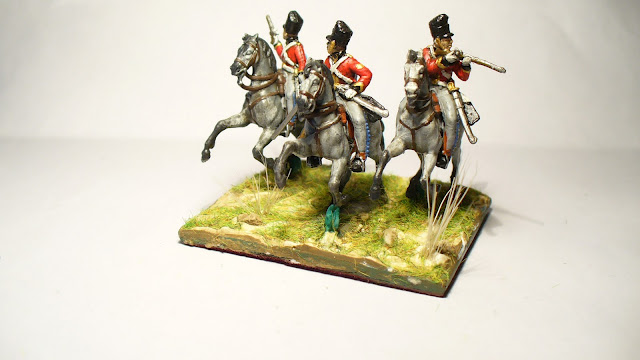 As the Greys passed the 92nd Gordon Highlanders, the Gordons attempted to advance with them, holding the trooper’ stirrups.

The charge built up momentum and the British “Heavies” launched themselves on the French infantry, the Greys shouting “Scotland for ever”.

The Union Brigade cut through the French and, now out of control, continued the charge up the far incline to the French guns, where they sabred numbers of gunners in Ney’s battery. The British were counter-attacked by French Lancers and suffered such heavy casualties as to eliminate the brigade from the battle. The brigade commander General Ponsonby was killed.

As the Duke of Wellington grumblingly complained “the British cavalry never know when to stop charging”.

The Greys adopted the captured French eagle as the regiment’s badge. It is still the badge of the present regiment: the Royal Scots Dragoon Guards.

The Emperor Napoleon is said to have commented of the regiment, “Ah ces terribles chevaux gris”.

The rest of the British Army wryly gave the Scots Greys the nickname of “the Bird Catchers”.

The Royal Dragoons also captured an eagle during the charge, that of the 105th Regiment.