Prior to the beginning of the second world war, three projects were begun for the building of armored boats: The two-gun BK-1124, the one-gun 1125 and the S-40. By June, 1941 85 boats had been built and 68 more were commissioned. The boats were to be used on the constrained river fairways in immediate proximity to the shores held by the opponents. The sizes of a boats allowed throwing them quickly on railway cars and moving them from one battlefield to another. The additional installation of the "Katiusha" volley fire system on the boats increased the efficiency of boats considerably. The boats active participated in operations on the Volga, Azov, Danube, Dnepr flotillas, on the Black Sea and with the Baltic Sea fleets. Because of their versatility and damage tolerance, along with their use of turrets from the legendary tanks T-34, these armored boats were called "River tanks".
The soviets also used the BK1125 Bronekater armored ship in frontal attacks against other land tanks and enemy infantry. The Katiusha rockets used in conjunction with the T-34 turrets caused terrific effects. Bronekater ships were also used for carpet bombing against fortifications and cities. Viene in Austria were bombed by Bronekaters. The Soviet BK1125 Bronekater had a crew of 10/12 naval sailors. The Soviet Bronekaters were transported by rail from one river to another. They were specially designed to be carried on wagon trains through tunnels and over bridges. 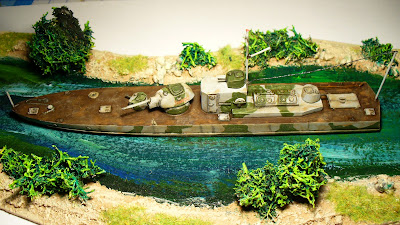 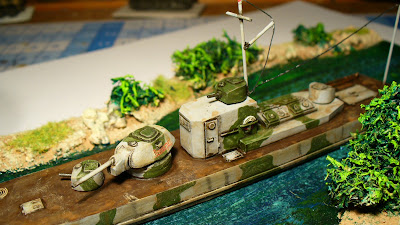 AER miniature
PS: This is not a diorama, only a wargaming section river with the BKA 1125 on top of it.
JF
Publicada por Jorge Faria à(s) 23:43