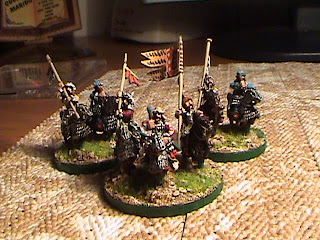 The Mongols are coming!
As promised, here is my report about my new wargames army: The Mongols (1221 AD). All the figures are based according to the Arcane Warfare Excel rules set, developed by our good friend Jerboa. All the following mentions and figures identification are also according to those rules. 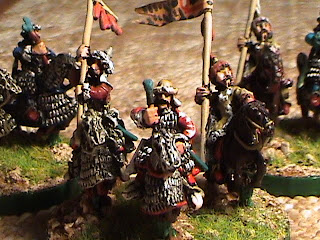 Here we have the comand stands, that are collectively called Co, with one General (Gn) and up to two Field-Comanders (Fo). In these rules, the purpose of the comand bases is to allow the interface between the player and his units, in order to mantain the army coesion and the orders transmission framework. They do not fight, but can lose comand potential under certain circumstances. 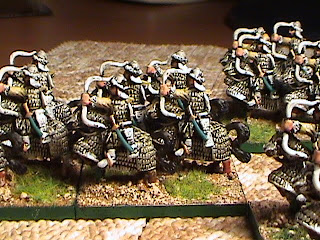 The heavies! Here are my heavy horse archers (HaH). This is the only rule set I know where you can use the horse archer according to it's historic role. 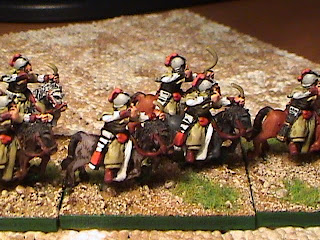 The medium cavalry (HaM). These are also horse archers, allowed by the army list, with considerable less armour and less fire power but with more manouvrability. In these rules, troops either medium and heavy are considered close-order troops, and the troops weight is distinguishable by the number of figures is each base: 2 figures: light; 3 figures: medium; 4 figures: heavy. 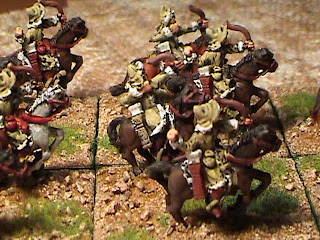 The backbone of the army: the light horse archers (HaL), of mongol origin. A swarm of horse archers can make any enemy army very nervous... 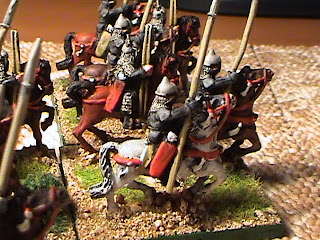 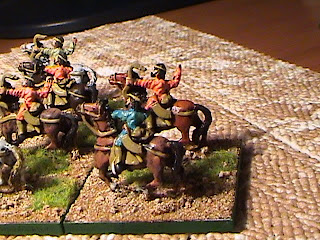 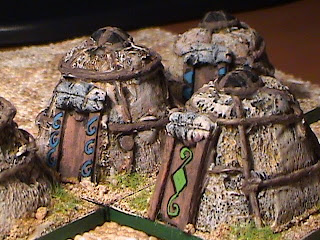 The Mongol camp. I got these from João yesterday. They are scratch built. 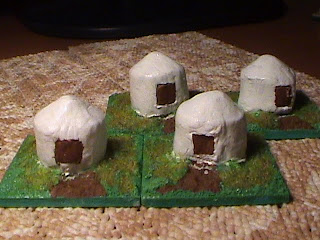 Here is the camp I used in my first games and that I made by myself (also scratch built). I suppose you can see some (not many...) differences in terms of art-work with the above. Right until now I'm not sure if they the are supposed to be yurts/gers or upside down yogurts... 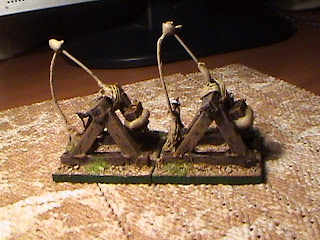 More scratch built art-work by João - the artillery (WE). 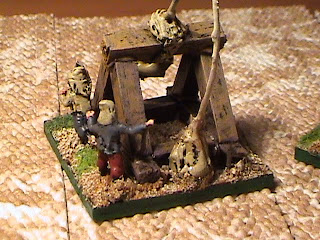 I could not find figures for this purpose and João had the imagination and the skill to produce these fine pair of trebuchets.

Who painted this army, you rightfully ask? You should ask, since those that know me, know that I could never have done it. The culprit is none other than our good friend João Pedro Peixoto, from Coimbra.
There is a story in this.
I ordered these excellent figures from the Museum Miniatures range and had them delivered directly to João, in Coimbra. I also asked Jerboa to send him the necessary bases for the figures.
Well, João painted this army (with 90 plus horsemen...) in more or less 2 weeks, since I needed it to participate in the first round of the 2010 Arcane League, that took place in Lisbon on March 21st.
But there is more!
I could not manage to go to Coimbra in order to get the army in time and I was going to Lisbon that day by train. Therefore, João offered to meet me in the Coimbra train station (the train makes a stop there for a few minutes) and give me the army - with a safety box included!
By the way, the train arrived in Coimbra at about 7.45 in the morning, on a Sunday...
Without being psychic, I can almost see all of you (all the 3 of you - yes, LPP, I'm including you now...) wondering: that must have been expensive...
It was expensive for João, since he did this for free.
Is this an outstanding guy, or what ? I'm sure that when they made João they surely lost the mould and have been looking for it ever since, since a guy like this just is not real !
There is a drawback to this: when I placed this army in the same place as my other wargames armies, I felt an irresistible urge to throw them all out the window...
João: now the whole world (all the 4 of us...) knows what a great guy you are. I think this worldwide publicity for you is deserving of a new army. I've got my eyes on a few hoplites from Xyston... just kidding...
I'm using this post to make another anouncement to the world: I'm going to start a brand new series of military history posts.
I'm calling them "The Character Series" - not very imaginative, I know, but what could you expect on a friday morning ?
My purpose is to deliver a string of knowledge pearls for your benefit, about the subject that fascinates me: the effects of war on the actions and reactions of men and women that came in contact with it, throughout History.

For instance, I still do not understand what Robert E. Lee meant, when he said "It is well that war is so terrible - lest we should grow too fond of it".
PC