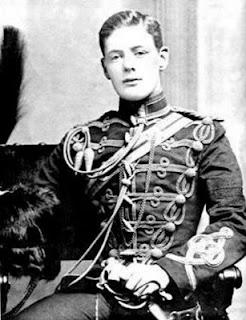 Character Series nº 1 - Winston Leonard Spencer Churchill
(Part I)
I suppose some of you may think that almost everything there is to know about Winston Churchill has already been written.
Well, I have to agree with you.
You will not find in this, otherwise totally innovative, Character Series previously unknown material regarding the personalities subject to appreciation.
My purpose is to make a personal appreciation of the life and actions of the Characters described here, in the perspective of their involvement or participation in one or more military actions, and how or why they influenced or where influenced by them. The opinions you will read here can, no doubt, be subjective or even biased - but if you want a shot at objectivity pure and simple, you should look it up elsewhere, maybe Wikipedia. After all, this is the Brigada Tripeira Blog and everybody knows we are a bunch of bigoted guys from Porto, in Portugal.
Almost anybody with even the slightest interest in History associates WC (as he is affectionately known to us) with World War II. His best known speech in the time of Britain Finest Hour still makes my blood run faster (check it out in: http://http//www.youtube.com/watch?v=6llT2ZYg-4E).
But, do you wonder why these words, in particular, sound real and inspirational ?
In my opinion this is because WC was a guy that "talked the talk" but that also "walked the walk" (freely quoted from the Full Metal Jacket film, 1987), and this particular mark of his personality appeared much sooner than the 1940's, as you will notice later on.
Let me try to explain this, using information from the excellent book by Douglas S. Russell, "Winston Churchill Soldier - The Military Life of a Gentleman at War".
(Background)
WC was born on 30 November 1874 in what we could define as a "golden cradle". One of his ancestors was the famous Duke of Marlborough (1650-1722), about whom WC wrote a biography (Marlborough, His Life and Times). On the other hand, his grandfather, John, was the seventh Duke of Marlborough, who by the way was one of only 27 Dukes and as such ranked just below the Royal Family in order of official precedence.
However, an aristocratic birth was not (and still is not...) a confirmed ticket to greatness. We can see that looking at WC's daddy, Lord Randolph Churchill, who apart from politics had no profession (politicians do not need to know how to do anything - they just manage somebody else's money...), lived a high society life and was constantly in debt.
Our Character seemed to want more than that for himself, as his early actions showed.
Nevertheless, this was a guy born within the ruling elite of the greatest Empire the world had, or has, ever seen - a fact that may be difficult to accept to some, but true. At a given point in the 19th century, Britain ruled over one-fifth of the earth's land mass and over one-quarter of its populations - impressive, by any standard.
And the path WC chose to rise above the clouds passed through the military institution and war was the trampoline of his choice, since his academical performance was average, to put it mildly.
In my next post (the posts in this Series will be placed on a weekly basis) I'll show you how tough this guy was.
PC
Publicada por Jorge Faria à(s) 08:28