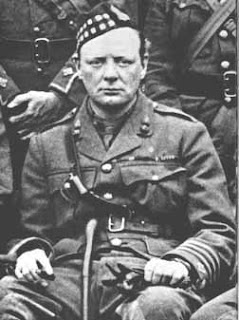 Character Series nº 1 - Winston Leonard Spencer Churchill
(Part II)
When you look at the life of WC there is no disguising the fact that, from his early years, he planned to use a military career to promote his future prospects in politics.
There was nothing new to that option. Many before him had done that, although only a few where as sucessful, after him.
Therefore, WC wanted to become noted in a way that could prove useful in a future political career. The thing is he chose to do that in the place where it hurt the most: the place where the bullets meet the meat.
Nowadays, I think the most hazardous place where a politician exposes his "meat" is when he appears on TV for a debate with a political opponent.
(The Cuban Insurrection)
WC seemed to have a strange curiosity regarding what his reactions would be under fire.
By the end of the year 1895 he had scheduled his annual leave from the 4th Hussars (where at the time he held the rank of Lieutenant). Going through all the necessary motions, he obtained permission to go to Cuba to "visit" the little war they had going on over there. He also secured an employment as a special correspondent for the Daily Graphic, a London newspaper, in exchange for some articles from the war zone in Cuba, that in practice resulted in the beginning of his career as a journalist.
And what about the prospect of being shot over there?
WC's answer: that "was only a sporting element in a splendid game". Do not forget this guy was only 21 years of age, at this time.
And there he went, with his friend Reginald Barnes (a Lt also from the 4th Hussars), arriving in Havana, Cuba, on the morning of 20 November 1895, after a brief visit to the good old USA.
There were Cuban rebels fighting for the independence of the island, using typical guerrilla warfare tactics. The rebels controlled the countryside and were largely supported by the peasant population. The Spanish army (Spain controlled Cuba since 1492) and the loyalist Cuban militia controlled the cities and towns.
Bearing the proper credentials, WC presented himself to the Spanish C-in-C (Marshal Martinez de Campos) asking if he would be so kind as to point him to where the fighting was. And he (the Marshal) obliged him.
By the 24 of November WC and his friend were already marching with a column of Spanish regulars, looking for trouble. He found them on the 30 November (strangely, on his birthday...) when he experienced, for the first time, the emotion of being shot at (nobody had the proper respect for a war correspondent at that time). In the following days he got increasing exposure to the fine tune of whistling bullets, and had the good luck of not being hit by one of them. He was not actually fighting, but was always in the presence of the General officer in charge of the military operations, whose staff suffered several casualties.
This exposure to danger was a somewhat sobering experience to WC. He later admited being rash in risking his life merely in search of adventure, but nevertheless proved himself physically courageous and cool under fire (not many aristocrats could, or can, say the same). He also got his first medal: the (in Spanish) Cruz de la Orden del Merito Militar, con distintivo rojo, de Primera Clase (a Spanish decoration given to officers). It would not be his last.
His articles about the Cuban Insurrection and his Spanish decoration were noted and brought him some public attention.
And he liked it...
(The Frontier War)
Shortly after his return to England, WC received the news that the 4th Hussars was to make a tour of duty in India. He tried to use his family connections to avoid going along to that boring place - they did not have a war over there, at the time. Instead, he tried (without sucess) to go along with Sir Horatio Kitchener to the Sudan Campaign, scheduled for that time (1896).
Therefore, WC had not other option but to go to India, where he set his foot on 2 October 1896.
I will let you know about his adventures over there in my next post.
PC
P.S.
Pop-up windows: as you have surely noticed, we are having a problem with pop-ups over here. We did not ask for them; we do not want them; we complained about them - to no avail, until now. Therefore, we can only arrive at two conclusions: 1) Somebody wants to make a huge profit on advertising, through the thousands of visits we have here everyday; 2) Somebody, besides being a nuisance, in clearly devoid of intelligence...
There is only one this we can ask of all the thousands of daily visitors out there: STOP VISITING THIS WEB SPACE!
This way we'll show'em a thing or two...
Publicada por Jorge Faria à(s) 09:15