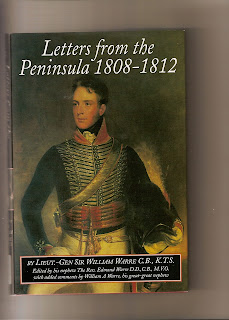 (Part I)
I am sure JMM is gloating, somewhere out there, regarding the fact that he was able to guess the name of the present Character, in this outstanding Series. There can only be one explanation: JMM asked his friends in the military intelligence department to help him with this. There is no other possible explanation.
However, things are going to change around here, regarding the “guess-the-name-of-the-next-Character” business.
No more Mr. Nice Guy.
My next Character’s name will be so hard to guess that I can almost say for sure that the available prize will be mine for the taking. Just you wait and see!
I came across the story of this fine fellow William Warre (from now on referred to as WW) in an unusual way. As some of you know, I devote some of my spare time to re-enactment in the Napoleonic period. Well, back in 2009 when I was working (pro bono) in the organization of the Bicentennial of the Battle of Porto (12th May 1809-2009) I came in contact with a Director of the Symington Family Estates, that was kind enough to mention the existence of this book about WW, that I did not know the first thing about.
He was also generous enough as to offer me a copy of that same book, and this is what made it possible for me to (once again) make a wonderful history post in this elevated and cultured web space.
This fine book mostly amounts to a collection of letters from WW to several of his family members, where he describes his daily life while serving in the British army stationed in Portugal and Spain, during the Peninsular War (1807-1814) although the period covered by his letters ranges only from 1808 to 1812.
(Background)
WW was born in the city of Porto (Portugal) on 15 April 1784, and spent most of his childhood there. To those of you that do not know, the city of Porto was (and is...), arguably, one of the finest cities in the world.
As a matter of fact, it is from this city that most of the guys of the Brigada Tripeira group are from.
Because of that, WW had a profound knowledge of the Portuguese language, which he would find very useful later on. His family was very well established in the business of Port wine, and was quite wealthy because of that.
After a prank in his family office (WW glued the pigtail of an elderly office clerk, that was enjoying a post-prandial slumber, with wax to a desk), whose humorous nature was not quite understood by his father, WW was sent to Bonn to learn languages and prepare to join the British army – the natural (it seems...) destination at the time for those who were not interested in that boring thing called work.
By August 1805 (at the fine age of 21) WW already held the rank of Captain in the 23rd Regiment of Dragoons.
This could have been due to an extensive experience in war or to outstanding bravery feats shown if the field of honour, but it was not.
It was due to that fine and proven system called the Purchase of Officer’s Commissions  extant in the British army (only abolished in 1871), that WW was able to attain such a prestigious and important position, given his tender years and absolute lack of real combat experience.
However, WW would prove soon enough that he was not afraid to visit the place where the bullets meet the meat, in battle.
In the year 1808 he was back in Portugal as ADC to Major General Sir Ronald Craufurd Ferguson, hoping to have some jolly good fun in war.
If all goes well, next week you might just be fortunate enough to know more about this.
PC
Publicada por Jorge Faria à(s) 18:28