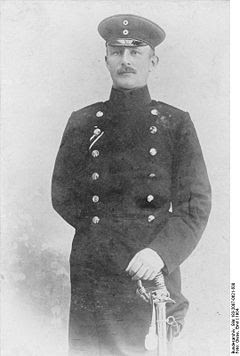 Character Series nº 2 - Paul Emil von Lettow-Vorbeck
(Part II)
As I mentioned in my previous post, LV became one of the masters of guerrilla warfare. In fact, Ian F.W. Becket (in his Encyclopaedia of Gerrilla Warfare) labels him "one of the most sucessful guerrilla leaders in history".
The term guerrilla derives from military activities during the struggle against French occupying forces in the course of the Peninsular War (1807-1814), and literally means "little war". But in my opinion, LV was more than just a sucessful guerrilla leader, since he did not just become engaged in little wars. When the number of his forces allowed it, he faced regular enemy army units in the field, in set piece battles, with uniform sucess.
One of such instances was the Battle of Tanga. 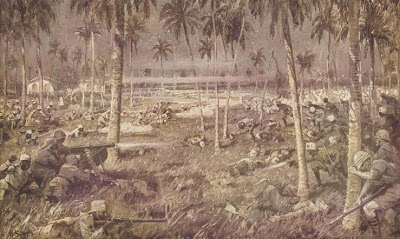 (The Battle of Tanga)
The word "tanga" has a funny double meaning in Portuguese. Over here in Portugal we feel that the politicians are set to give all of us a lot of "tanga", that can be roughly translated as hoodwinking.
But "tanga" was what I can say LV gave the British army, in early November 1914.
The first shots of WWI in German East Africa were fired on the 8th August 1914, by two English light cruisers. They fired at the wireless tower extant at Dar-es-Salam (the Capital) trying to bring her down. They missed every shot, since the tower came out unscathed from the encounter. Faulty gunpowder, maybe...
LV had ordered combat patrols to enter the British territory (British East Africa, modern day Kenya) situated to the north of German East Africa, and operate against the Uganda and Magad Railway. This was the main supply artery of the region, with a length of about 440 miles, wich offered multiple opportunities for disruption of traffic to a bad intentioned opponent - as LV set himself to be. These attacks or at least threat of attacks were sure to draw the attention of large numbers of enemy troops, needed to protect it.
Do not forget that since this guy wanted to "grip the enemy by the throat", the Uganda Railway was very importante strategic objective - and LV readily identified it as such.
And because of that, on 2 November 1914 the British army came knocking at his door, with two cruisers and fourteen transport ships. More precisely, they knocked at the door of the coast city of Tanga, situated about 80 kilometers from the northern border with British East Africa. The landing of the British troops started on 3 November. Our Character ordered the general alarm to be sounded throughout the Colony, since he had only two Askari companies in the neighbourhood. As the fighting began, he kept directing troops to it, as they arrived. This operation was only possible due to the improvised but very efficient supply and transport system they had meanwhile organized - something I think only a German organization could have pulled off at the time.
Our hero considered that the British troops were clumsy to move and were more clumsily led in battle, but he sometimes faced odds of 20 to 1. The number of his Askari troops was a little over 1.000, arriving piecemeal, while the enemy landed between 6.000 to 8.000 soldiers.
On the other hand, LV's troops were raw and had never seen combat before. They several times wavered in combat in a most dangerous way. Do you know what this guy did at such times ? He and other German officers got to the front line, standing and laughing, taunting the Askaris for being afraid of the enemy bullets and enemy numbers. But this way he got what he wanted from them. When ordered to charge with the bayonet, they did it with a vengeance.
And then it was time for the British colonial troops to take to their heels!
The battle was over by 5 November. The British suffered a thorough beating and were forced to retreat in haste back to their transport ships, leaving in the field a lot of weapons and supplies, besides large numbers of dead and wounded soldiers. Those supplies the Germans endeavoured to put to good use, since they were short on every war materiel.
In his book, LV estimates the enemy casualties in the thousands, while his were a little over one hundred. It was noted that the German medical staff treated equally well all casualties, regardless of nationality, and many wounded were set free on parole (a solemn oath given not to fight again in the war) - this gentlemanlike aproach to war became an LV trademark, and assured him many friends among the British after it ended.
This reaction on the German side must have been an unpleasant surprise to the British command, but our Character knew better than to think the determination of this particular enemy might decrease or be affected by it. He knew full well that the British were tough and resilient and started to prepare the follow up. As you can see, at this stage he was still planning and conducting regular military operations, since the number of troops and resources at his disposal allowed it.
But he also knew that this situation could not last for long - and you will also know more about it next Friday.
PC
Publicada por Jorge Faria à(s) 09:38