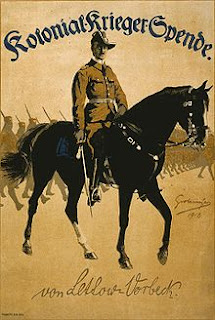 Character Series nº 2 - Paul Emil von Lettow-Vorbeck
(Part I)
Heavens be praised - it is Friday! But this is a moment of joy mostly because it is time for another post of this fantastic Character Series. In fact, I am sure this is the moment you have all been waiting for.
One of you (the only one that bothers to read these posts to the end?) tried his best to guess who the next Character would be, but he simply could not manage it. My bet is that none of you had ever seen the name of this guy before. Am I correct ?
JMM: good try! But I think my Mongol army will have another chance to thoroughly kick your Roman army ass once again in the field of battle. By the way, his name starts with a "P" and not a "V", after all - it was just a (dis)honest mistake; there are two "Vs" in there anyway...
I first came across the story of this fine German fellow when I was browsing through the Portuguese campaigns in Africa, during World War I. My curiosity was awakened, so to speak, when I read that he kicked some Portuguese ass in Northern Mozambique at that time, while greatly outnumbered. I thought to myself: here is another German guy that messed up our national pride during WW I. Right when I was about to lose any interest in him, I noticed that even before he arrived in Mozambique, he had also made some serious ass kicking among the British and the Belgian armies in and around German East Africa (modern day Tanzania). Then I thought to myself: here is a guy worth knowing more about!
And this is how I came across the book "My Reminiscences of East Africa", written by the man himself, from now on referred as LV.
(Background)
LV arrived in Dar-es-Salam, in January 1914. In his pocket he had a nomination as commander of the Schutztruppe (protection force) extant in the Colony of German East Africa, effective 13 April 1914. 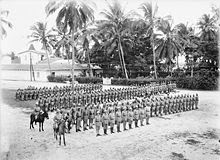 (Askari Company, German East Africa, 1914)
He had not a very formidable force at his disposal, mind you. At the outbreak of the war he had 216 European, 2.154 Askaris (African soldiers) and 45 European police officers, who were the (more or less) regular troops. Eventually he reached the number of 3.000 Europeans and 11.000 Askaris in the ranks.
LV was no stranger to combat, at the time he arrived to serve in his new post. He had seen action in China (Boxer Rebellion) and in German South-West Africa (modern day Namibia). Unlike our last and more famous Character, LV did not have the benefit of a "golden cradle" - on the contrary. Born in 20 March 1870 in Pomerania, Germany, LV seemed to be destined to serve in the army. I even think he did not have much of a choice in the matter, since he was dispatched from an early age to boarding schools and later on to the corps of cadets in Potsdam - this is what happens when your parents do not want to put up with you.
German East Africa was very near the end of the world, as far as Germany was concerned. Because of that and when confronted with the beginning of WW I, LV knew he could expect scarce (if any) supplies or reinforcements. Therefore this guy assessed his situation and outlined his strategic objectives as follows:
a) The decision of the war and the fate of the German colonies was sure to be decided on the battlefields of Europe;
b) Himself and every Germand subject, regardless of his geographic location, had the obligation to contribute his share to acheive a result in this war favourable to Germany;
c) Placed in a subsidiary theatre of this war, he considered his duty, with the small forces at his disposal, to prevent as many enemy troops as possible to be used in the E.T.O. (that means European Theatre of Operations, you uncultured people out there);
d) At the same time, to inflict on the enemy the greatest possible losses, in men and materiel.
And how do you suppose he planned to acheive these apparently simple objectives ? Find out yourselves, by reading his own words: "it was necessary not to split our small available forces in local defence, but on the contrary, to keep them together, to grip the enemy by the throat and force him to employ his forces in self-defence".
Looking at this objectives outline, two words spring to mind: Guerrilla Warfare. LV became, as many think, one the most sucessfull practicioners of this kind to combat, in recorded history.
And remember this: he was a regular German army officer, raised in the Prussian military tradition. His decision was opposed, from the start, by the civil authorities of the Colony. He overcame that oposition without alienating their support - no mean feat by itself.
Stick around, and you will find out more about this guy in my next post.
PC
Publicada por Jorge Faria à(s) 08:49