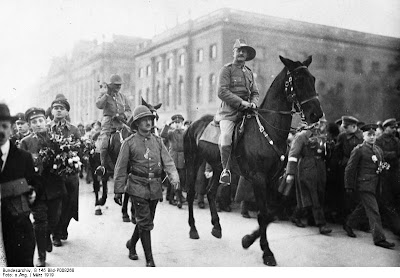 (Part III)
After the battle of Tanga, LV still managed to pursue a more or less regular defensive strategy. This particular success revived the determination to resist throughout that German Colony and every industry and productive activity there extant, in German national's hands, contributed without reserves to the war effort.
LV even managed the odd day off work to go on safaris, what he called a "cheery day's shooting".
But trouble still loomed on the horizon. In the month of January 1915 there was another major combat action, this time in the village of Jassini, in north-east German East Africa, where the British forces were assembling for another push against the city of Tanga. After a battle and a siege of only a few days, the British surrendered, suffering about 700 casualties. LV's forces were, once again, outnumbered.
In this and sucessive encounters, the German Askaris learned that one of the major factors of success in battle is the need to "overcome one's feelings in order to obtain the superior moral force necessary for victory" - this is LV speaking, by the way.
In the following months a succession of actions took place, that resulted in the erosion of LV's combat strength. The toll on his officer corps was great since, following his example, they had the habit of leading in the front line. Therefore, they fell in desproporcionate numbers and could not be replaced.
This very able officer corps deserves their share in LV's success. Officers like Major Kraut, Captain Auman, Captain Tom von Prince, Captain Taffel, Commander Schoenfeldt, among many others officers and NCO's, where brave, highly motivated and with a keen sense of duty and spirit of self-sacrifice.
It is truly a pity that the human race periodicaly sees the need to express such high and noble feelings by the way of ending each others lives - in a cycle that seems without end.
The drain on the available supplies was also great, also with no hope of replenishment. This army had to win in order to survive, getting from the vanquished arms and ammunitions - You have read something similar to this in here, regarding the tactics of good old Genghis. One of the formulas for success in war, maybe.
There was also a hidden danger, common to every war in Africa. The use of native troops had a limit. Normally, when one side seem defeated or on the verge of defeat, the native troops not only deserted the ranks, but usually turned on their former "employers", together with every tribe in the neighborhood.
The weak did not (and do not) have a chance in Africa.
It was to LV's credit that he managed to evade this fate for himself and his forces. Even when outnumbered and forced to live on the "bush", his Askaris did not leave the ranks in considerable numbers. There was a feeling of true comradeship between them and the white officers and other ranks. On the other hand, every time one of the local tribes tried to test their mettle, they usually regreted it, suffering harsh lessons that lasted in their memory.
With the arrival of South African troops, aided by encreasing contingents of Belgian troops, things changed for the worst. From 1916 on, LV had to give ground - but always fighting has he went.
By the year 1918 LV's forces were reduced to a flying column of a little over 1.100 troops, that always seemed able to avoid being captured by the many enemy troops (about 300.000 - Portuguese, British and Belgian) that searched for them.
By the way, he was informed of his promotion to General by his opponent (General Smuts), while in the "bush" (by messenger). Smuts also sent his compliments because of that promotion.
LV surrendered only when a British officer had the good will to inform him the war was over and that Germany had lost. Maybe they thought that was the only way they could catch him.
Our hero went back home to Germany to receive a hero's welcome, and for some years his work was recognized and appreciated.
However, when he died in 1964, he was receiving a small pension organized and payed by his former enemies (courtesy of General Smuts and other British and South African officers), since his government did not recognize him the right to a full pension and he was living in destitution.
This one thing reveals a lot about LV's character, as a man and as a soldier.
This guy had served his entire life in the German army and only married in 1919. His two sons died in WWII, while also serving in the army. Taking all this in consideration, his country saw fit to reward him by organizing a nice funeral (you can look it up on youtube) in his memory.
This is the way of this World.
Well, this is the end of the story of another fantastic Character in this no less fantastic Character Series.
Once again, I am sending a world wide challange for those of you who are brave enough to try and guess the name of my next Character. By the way, given the (dis)honest mistake I made in my last challange, and that JMM complained so much about, he received a brand new book on LV for his trouble.
And now, my friend, it is time for you to show your mettle, and guess the name of the next Character. His name starts with an "A", followed by an "L" and a "C". That's "ALC" - for those of you that cannot spell right.
JMM: you have no excuse now.
If you fail, prepare yourself to paint my Crusader DBA army. You can ask JF to help you.
PC