For all this once again I am going to follow the directives laid by Mr. Ritterkrieg (http://www3.telus.net/Ritterkrieg/ ) and his infantry painting guide
(http://www3.telus.net/Ritterkrieg/progress3.htm ). He's using GHQ figures which are bigger and beefier than H&R, which is not to say they're not excellent, because that's what they are!
Here is one photo from his guide, and I call your attention that the figs are 6-7mm tall to eye level at most. 6-7mm I said! 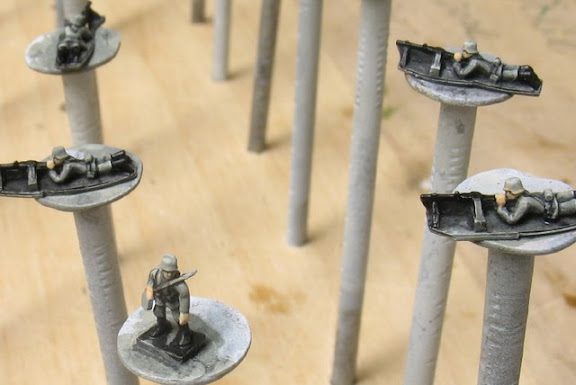 He must be slightly mad, because he actually paints camouflage schemes on his figures in this scale! 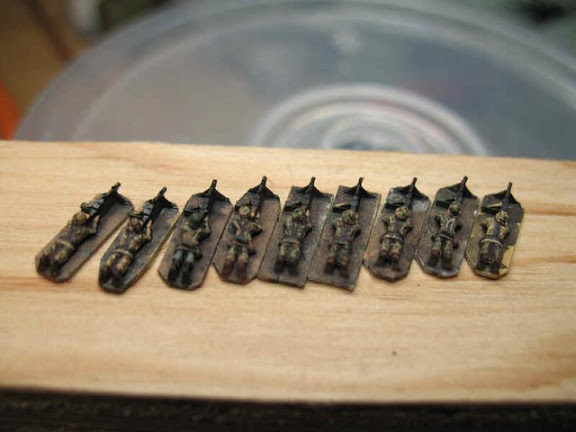 He says:
LMG Gunners: with their smocks done. The MGs and ammo belts still need highlighting and the boots need gaiters but you can get an idea of the variety of clothing. Blurred edge, plane tree, tiger and autumn oak leaf. The only one missing is Pea dot but there are some others with that pattern - not shown. I have deliberately mixed the uniforms on some figures. Sculpts are modified only in that the winter hood is removed. I have used the Winter, Afrika and standard infantry poses.
Unfortunately he does not explain how he did this…
As I said above, I'm going to repaint old figures but this is an extreme measure, this is something that if I had new figures on hand I would not do. As these figures were being painted some 10 years ago using the boooooring old style, I decided to use them as they were but giving them a coat of matt white first. As usual with wargame figures I stick them to wooden strips some 20cm long using only a light dab of white glue so I can pry them off easily later. This gives me a good grip and allow for my technique of repeating the same brush stroke 1-2-3-4-5-6-7-etc times, then repeat for the next different stroke. You are not painting individual figures, you're painting say 20 torsos, thens 20 right arms, then 20 helmets, etc. In case your figures are rather varied, you can at least group them on the strip by pose. 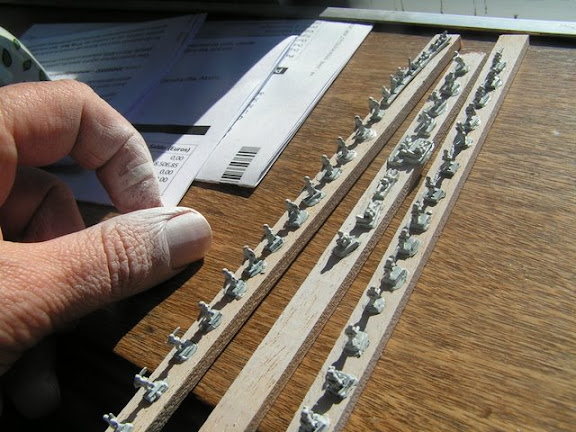 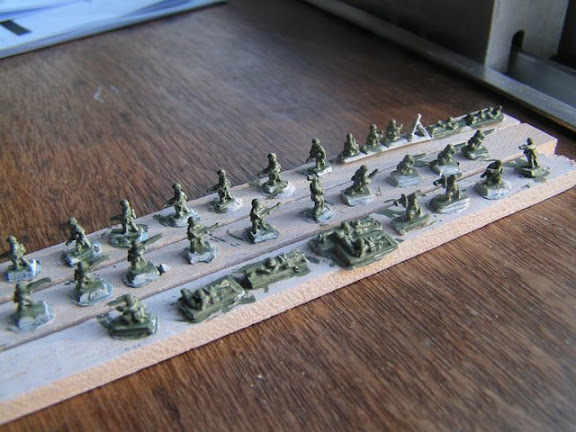 So after this white primer is quite dry I went over then with the basic feldgrau, somewhat thinned to allow the white to shine a bit through the green layer. 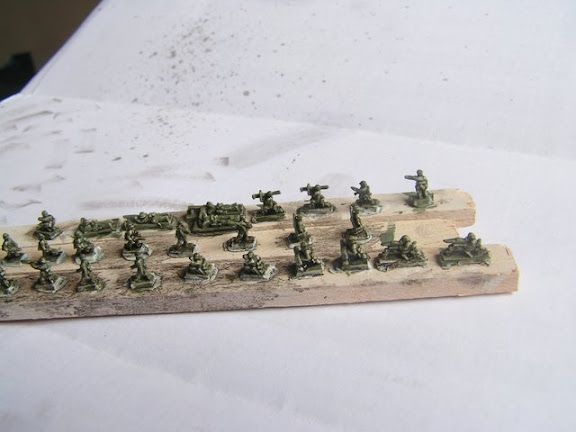 After this was dry (am I repetitive or what!), I gave them a thinned out (synthetic paint thinner) coat with MiG Dark Wash (see here), I find this works very well with acrylics and the pigment is extremely fine), although I'm sure acryllic black with some brown would work as well, thinned with Windex. 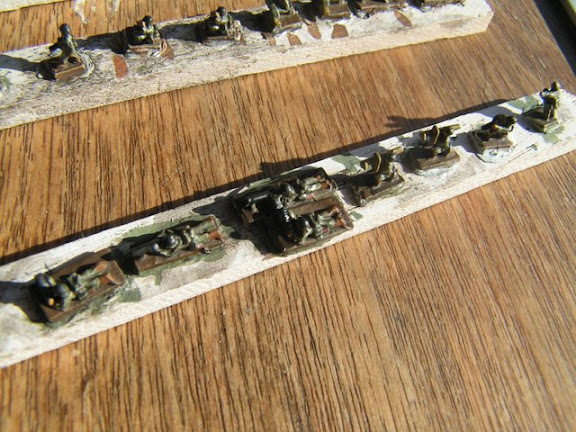 Same technique as for the tanks: let dry a bit then lightly remove excess with a flat stiff brush moistened in thinner (would this work with acrylic?), and after all dry and cured next day, it took a light drybrush coat to bring relief out in this case using Luftwaffe RLM 02!
To continue...
Publicada por Jorge Faria à(s) 07:56