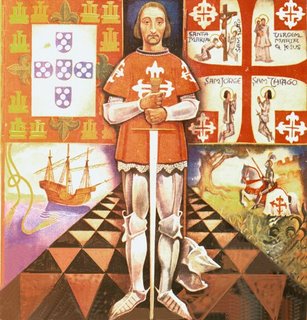 (Part I)
Once again, good old JMM guessed correctly the name of the present character. It so happens that this time I made a serious effort to chose the easiest guy I could think of, in order to allow our numerous and loyal followers from Australia a chance at winning the valuable prize I was offering.
But no; he had to step in and ruin their chances.
JMM: that was not a fair thing for you to do, you know.
I already warn you that you will not stand a chance of guessing the name of my next character and there will be a serious prize involved (for me…), in case you do not do it correctly.
Be warned!
(Background)
Nuno Álvares Pereira, also known as São Nuno de (from now on referred to as NAP) is a name that to most of you foreign guys out there does not mean a thing. However, for a Portuguese bloke, with a minimum knowledge of his national history, it is immediately identifiable, even more so because NAP was recently (26 April 2009) canonized by Pope Bento XVI.
But NAP’s saintly virtues were not the thing that gained him a place in the limelight in this most elevated and wonderful web space.
His martial qualities did it for him.
NAP exact date of birth is generally located in the 24th of June of the year 1360. He was not born out of his father’s holy wedlock, so to speak, therefore his birth must have been more or less problematic (little did they know that he would be the founder of the Royal House of Bragança…).
By the way, his father was a member and leader of the most venerable Order of the Hospital, in Portugal.
Hey, wait a minute:  weren’t those guys supposed to be some kind of monks?
Nevermind, that was just a technicality anyway.
NAP was an illegitimate son, after all, but soon to be legitimized by royal decree (you know what they say about friends in high places…).
From his early years it seems NAP revealed a profoundly mystic personality, with a taste for the spiritually heroic virtues of the medieval knight, as portrayed by the popular books at the time, like the legend surrounding King Arthur and the Knights of the Round Table or the heroic tales of Charlemagne, King of the Franks.
With barely 13 years old, our hero was introduced to the court of King D. Fernando I and became squire to the Queen D. Leonor Teles – who it seems was as beautiful as she was evil and  soon to be the cause of much pain and suffering to the Portuguese kingdom.
However, the woman that would cause such serious danger to the independence of would be the same woman that would knight NAP, who in turn would become the main force behind the preservation of that independence.
Isn’t it funny how some things turn out ?
King D. Fernando I, it seems, was kind of a lady’s men. He was seduced (without too much effort) by D. Leonor, at a time when she was still a married woman, and secretly married her, after obtaining the annulment of her previous marriage on some trumped-up motive.
What could one expect after such a promising beginnig to a relationship?
Her ex-lawful husband thought it best for his health to escape to , where, in a more or less joyful mood, regularly exhibited a pair of golden horns in social events.
In my next post (whenever that will be…) of this wonderful Series you will know something more about the political and social environment that eventually bred a hero.
PC
Publicada por Jorge Faria à(s) 22:25