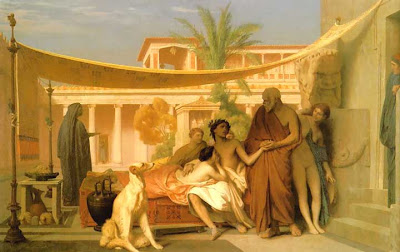 Character Series nº 3 - Alcibiades
(Part I)
As you all have noticed, I missed my last self-imposed deadline for publishing these posts (every Friday), and I am already warning you I will miss the next one, scheduled for next Friday. Something happened that I could not avoid and that is giving me a hard time: that crazy little thing called WORK (how I hate it...).
I am a firm believer in the words of one of the foremost Portuguese philosophers of the XX century (Agostinho da Silva) who said that man was not made to work. The moment I figure out how I can do that (not working, that is) and still manage to eat and pay my bills I will let all of you know about it. We can even start a secret society and keep "the know" just to ourselves.
Enough writing about nice guys! If I kept my previous trend, some of you might even come to the conclusion that only the good guys like to get involved in the business of war - and that just is not true.
This is the reason why in this outstanding new post, in this no less outstanding Series, will be about Alcibiades, a guy that could also be called "Prince of Darkness", given his simple and forthcoming approach to life.
(Background)
Alcibiades (from now on referred as AL, as I am sure he was called by his many friends) was born in 450 B.C. as the son of Cleinias, of the Deme Scambonidae. As you all know (or wished to know), this was the usual way used in ancient Athens to identify a person: by his name, his father's name and the Deme he was originated. Since the VI century B.C., Attica (the geographical region around the city of Athens) was sub-divided in Demes and only a guy enrolled in a citizen-list of a Deme could be admitted as a citizen of Athens, for all legal and social purposes.
Our (anti)hero AL was (like WC) an aristocrat and was also born in a shinning golden cradle, although I think that during his years he tried his best to taint it.
Throughout history, I think there are not many guys that could say they were the main cause for the overthrow of an Empire.
Well, this guy could, regarding the downfall of the Athenian Empire!
Both Plutarch and Thucydides give us a very colorful picture of AL in his early years. Apparently, he had many things going for him: good looks, a lot of money and very powerful social and political connections.
His childhood is full of colorful episodes that tell us a lot about his personality.
They say that during his school days he refused to learn how to play the pipes, on the ground that it was not appropriate for a person of noble and free birth, due to the disfigurement and distortion of appearance it provoked.  By doing that, he led a lot of is fellow pupils to drop out of that fine musical activity.
There is another story regarding one of his lovers (one of many, so they say...), Anytus. It is said that AL went to his house with a few friends, all drunk, while Anytus (supposedly a person of some social distinction) was having a social event. Upon arriving, AL ordered his servants to take away half of the silver and gold cups extant at the dinner table, and left without a word to the owner of the house. Replying to the indignation of his guests, Anytus answered: "No, he behaved with moderation and kindness. He could have taken all the cups, but he left us half of them".
In another occasion, AL publicly punched a guy called Hipponicus, without any reason or just cause and simply left. That guy was the equivalent to a Bill Gates in Athens, at the time. Due to the public outrage that action provoked, AL presented himself at the door of Hipponicus, took off his cloak and told him to thrash him for his action. Because of reasons I cannot fathom, that guy not only forgave him, but later gave him his daughter in marriage (something he must have sourly regretted, as the future unraveled...).
Analyzing these and other episodes told about AL, I arrive at the conclusion that from his early years he exhibited all the traits associated with a rich spoiled brat, used to always have his way - and whose ass nobody took the time to thoroughly kick, a few times.
Not that it would be an easy thing to do, mind you, since AL also showed he was brave and tough in battle. He demonstrated that several times in pitched battles, such as those occurred in the campaign against Potidaea and in the battle of Delium.
The problem is that when AL entered into public life, he could not but bring all those nasty traits of his personality with him.
And the Athenians were going to regret it, as you will notice later on.
PC
Post-Scriptum: Those of you that have nothing else better to do but visit this Blog have noticed that things are constantly changing around here, in the last few days. JF is guilty of that. He thinks he has great skills as a designer, but that simply is not true (JF: black in not in). Any changes made that look great have been made by me (and now I do not know how to take them back...)
Publicada por Jorge Faria à(s) 17:55