Apply the glue in more or less connected spots while William watches approvingly, then lay the batch on the bottom of a tub with your flock mix and let the flock flow over everyting. 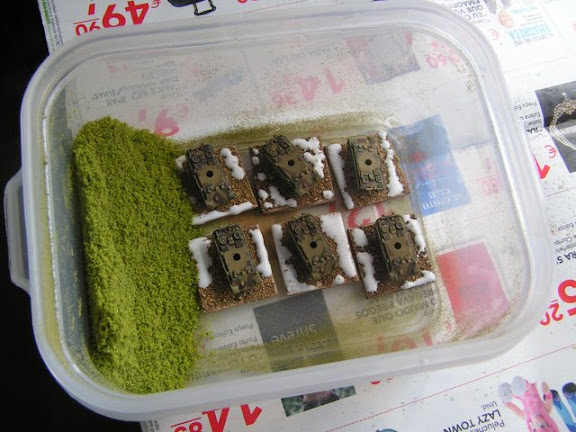 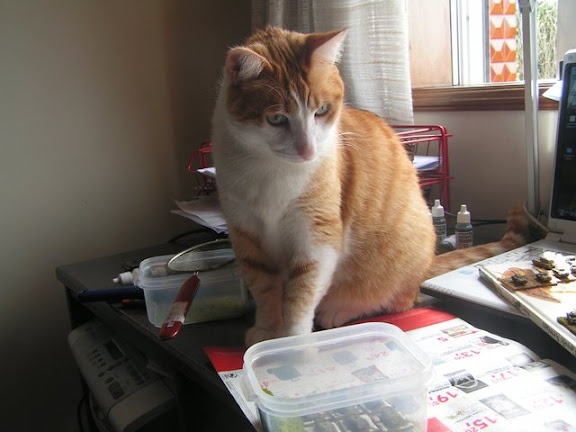 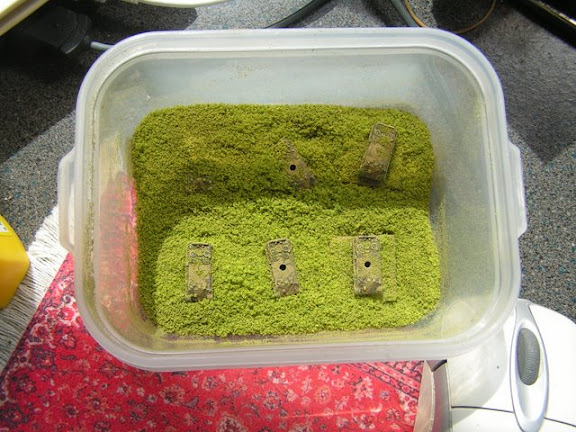 Alternatively you could sprinkle your flock over the bases laid on a sheet of paper through a sieve. Don't press on the flock, and don't worry if you have everything shrouded under green dust, you can blow or brush the excess later after it's completely dry. Mind the SWMBO, though!

More later, as the beauty of this is that it is an incremental process, that is, you can add more stuff later if you feel like it. For instance, you can add more flocking on top of this one making it thicker, you can add bits of hedging, tree trunks, stones, etc. I’ve seen this referred to as a Bonsai Diorama!

As a matter of fact as my Regiment HQ base will be somewhat larger, 4x4cm, to contain one Panther, one Kubelwagen and a radio truck, I may give it a different treatment. We'll see later.

All right, so I've more or less finished the Division's Pz Regiment, time to take the plunge and tackle the Infantry.

I rummaged around and found one box of semi-painted Heroics & Ros Germans. H&R figures have been rather out of fashion lately, people are going for Adler and GHQ figures which are indeed superior, and the GHQ as usual are superlative, but as I have these ones right now that's what I'm going to do. Maybe later when I do the Volksturm I may go for GHQ ! Another fact is that GHQ are several times more expensive.

So this is the ragbag I've got. 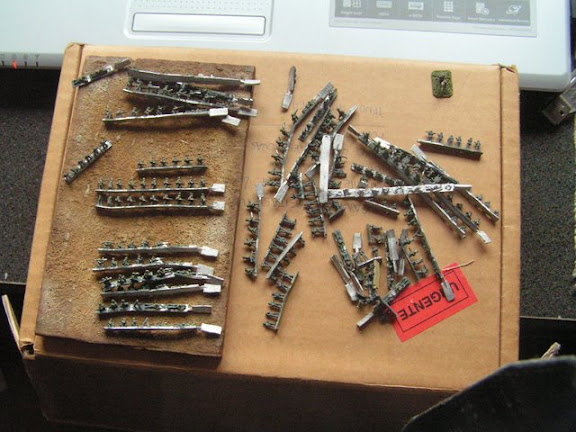 I'm sure I have others somewhere, together with some from Main Force Miniatures, but you know how it is, when you're looking for something you'll never find it when you want it.

First of all I'm going to sort this out and give them a bath. Ideally I need 4 battalions x 9 bases worth of riflemen plus supports for the two Abteilungen which at 4-5 per base would be about 150 figures. I haven't even counted these ones.

Most of these figures were painted at least partially some 10 years ago using the basic technique of same green overall, nothing else. Of course I'll have to do better this time! Either I get new figures or use the painted ones. Removing paint from 6mm figures is something I'll never do again, I tried several methods and it never works! So over the extant coat of whatever will go a layer of Humbrol matt white, shot with an airbrush. So enough waffle, I have to start, will do one Abt. at a time.
To continue...
Publicada por Jorge Faria à(s) 21:06