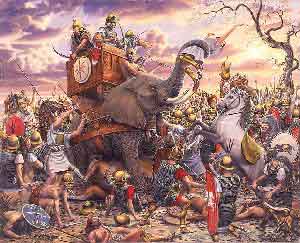 (Carthaginian elephant in action)
It seems the stage is set for a victory by Hannibal in the current poll.
Over here is seems the underdog always wins.
Like any great general throughout history, Hannibal was willing to do anything necessary to get the job done.
Any breach of discipline among his heterogeneous troops was mercilessly quelled. Crucifixion was a favorite method on that regard.
Before the battle of Cannae he made a joke with the name of one of his officers (Gisgo), that was repeated throughout the ranks and did much to diffuse the anxiety created by the sheer numbers of the Roman army that faced them. 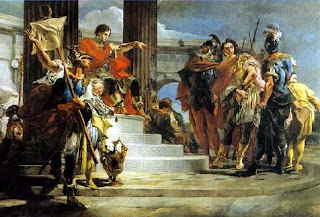 (Scipio Africanus)
Scipio came from a traditional Roman family, with a lot of power and political connections behind him.
However, this guy is all "black and white", when compared to Hannibal.
Some say he is one of the great strategists that ever lived, but I have serious doubts about that.
Well, we now have 13 votes in this poll, so I can already consider it a sucess!