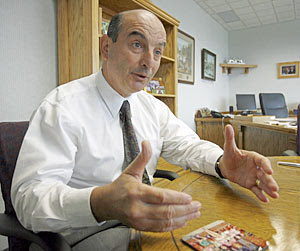 (Part I)
Those of you that bothered (or were able…) to read the comment box in my the last post noticed that JMM was fortunate enough to guess the name of the present Character, in this (it is never too much to mention) wonderful Series.
Well, the truth is that I chose an easy enough Character this time, to give him a chance to guess it's name, since this guy is always whining about never being able to get it right.
By the way JMM: your guess was not entirely correct. You did not mention what the initial “R” stands for. Therefore, you are not entitled to win any prize. I am sorry about that, but those are the rules. And by the way, this particular set of rules is liable to be changed at any time, without previous notice.
I think Mr. McDonough is still around us and hopefully in good health. Maybe he would be so kind as to inform us what the initial “R” stands for, since I was not able to find out about that myself, in the extensive research I made for this extraordinary post. If he is not interested in doing that, maybe he would be so kind as not to sue us for any damage we are liable to do to the reputation of his fine book.
The fact is that James R. McDonough (from now on referred to as JM) wrote a very fine book regarding his experiences in the Vietnam War, entitled “Platoon Leader”. I came across this title while browsing the Officer’s professional Guide (USMA, 1998, page 47). By the way, if any of you knows of a more recent edition for this guide, I would very much appreciate an indication about where to find it.
This is one of the books in my very modest war history collection that I simply have to read once in a while. And the main reason for that is because JM tells his story how he lived it, with a sincere and clear speech, allowing the reader a look at the (conflicting) emotions and at the reasons behind the, sometimes, extreme decisions that the leader of a platoon in a hot area in Vietnam was liable to face. The action takes place in the , Tam Quon district, Binh Dinh province.
JM arrived there in the summer of 1970. By that time this war was not very popular in the , for several reasons which I consider myself too lazy to explain here – you just have to trust my word on that.
Everybody loves a winner, and when a clear cut victory is not in perspective, the so-called blame game begins, regarding any human endeavour, most of all in war. Then (as now…) any soldier that gets himself involved in a war that reaches that state of affairs should not expect a lot in the way of public or private recognition for doing his job.
Therefore, the question arises: why would a guy even consider volunteering to such a situation when, on top of all, his own life would be at risk? I think JM gives us some credible clues on that matter, which enables the reader to take his own conclusions.
This book is also outstanding in another aspect, that for me is more relevant: it allows a guy (such as yours truly…), that does not know the first thing about modern combat, a glimpse of what a leader has to do to induce a group of foot soldiers to leave the protection of a trench or a fox hole and face the muzzle of an automatic weapon, handled by a well trained and motivated enemy. I already warn you that just saying “please” would not be enough.
And why some leaders are able to do it, meaning to induce that kind of motivation in a subordinate, and others are not.
In one of the first chapters of JM’s book the pace is set on that matter. The guy that JM was about to relieve as leader (lieutenant) of the 2nd Platoon, Bravo Company, 4th Battalion, 503rd Airborne Infantry, stationed in the above mentioned location in Vietnam, was at the end of his 6 month’s rotation, after deployment in a combat area – an officers privilege. The common soldier had to endure one year of fun and games on the front line, not that a “front line” would be an easy thing to find in .
Well, that guy did not know the first thing about leadership, since in his mind the only mission important for his subordinates had was the preservation of their leader – himself.  That guy was a sorry, but unfortunately common, example of a combat leader in , meaning the kind of guy that got his men killed for no purpose at all (for the sake of argument, I will assume that any death, in any war, is meant to have a purpose).
Right then JM, green as he was on arrival in , began to have some doubts regarding the kind of leadership he would be able to provide to his men.
And then he set his mind on defining it.
Stick around, and you just might be lucky enough to know more about what happened next.
PC
Publicada por Jorge Faria à(s) 09:51