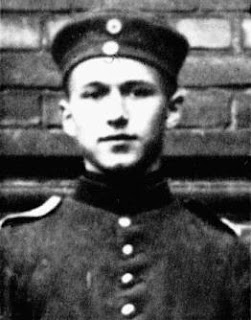 How hard can it be?

I mean, was this the easiest name to guess in all this Series until now, or what?
But you did not guess it, and this only reflects the fact that all you guys simply are not into this History research thing. Surely you did not expect me to tell you the nation or geographical origin of this guy or the conflict he participated in, or any temporal reference. If I mentioned that, even my 3 year old kid would know the answer!

Next time I will let MM’s cat enter the competition. My guess is that he will win…

I came across the story of this guy the (for me) usual way: while browsing the recommended History books in the Amazon web site. The book Storm of Steel (the original title in German is In Stahlgewittern) was written by the man himself and, as many said before me, it is one of the most truthful and honest stories around, regarding the experience of a man in war, and a brutal one at that.
Another thing I liked about this book is that the author does not indulge himself in political and philosophical considerations. He tells it how he experienced it: the story of a civilian turned into a professional soldier by the experience of battle.

As usual, from now on I will refer to this guy by his initials - EJ

How do they grow guys like EJ in , anyway? My guess is that, after the Portuguese, it is among the Germans that it is easier to find the toughest guys, with the strength, attitude and skills necessary for war. And let’s not forget the guys from the – as the saying goes, there is not a guy from the South who does not know how to fight!

EJ was born in (German Empire) in March 29, a middle class family without relevant traditions in the military institution.
“Restless” could be a good adjective for this guy, since at the age of 18 he escaped from home in order to join the French Foreign Legion, in Algeria (Africa). However, that adventure did not last long.
On 1 August 1914 he was back in , doing something natural to him – volunteering for the army on the first day of World War I, at the age of 19. He sets his foot in France (Bazancourt, in ) on 27 December of the same year, with barely 2 months of training behind him.

At that time, the “slow grinding pulse of the front”, as EJ calls it, became obvious to all the recruits just extracted from civilian life and eager for the adventure of war, with dreams of heroic experiences in battle – another characteristic common to every group of young men that throughout the ages are thrown in the midst of an armed conflict.

And then reality came crashing in – as always in such situations. The first casualties of war together will the strategically placed pools of gore (in this case caused by the, soon to be familiar, enemy artillery), had a sobering effect on EJ and his friends.

In my mind, the thoughts “how the hell did I get myself in this situation” were surely the most prevailing among those guys, at the time. Well, too late for regret now, alea jacta est!
And from then on EJ goes on describing his and his friends experiences in that dreadful conflict, where the enemy soldier was a rare sight to see but where death happened in the most unexpected and violent manner.

You have to wait until next Friday to know more about the ups and downs of trench warfare.