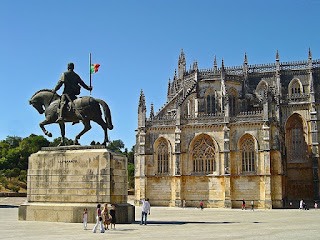 (Part IV)
In my last post you saw a glimpse of what it took to make a combat leader in medieval times (or in any time, for that matter).

As you noticed, NAP continued to charged alone a much superior enemy force, when all of his companions came to the conclusion (on the way...) that discretion was the better part of valour.
This attitude on the part of NAP's companions was in tune with the attitude of most Portuguese soldiers at that time, who were used to see most of their leaders order a charge against the enemy and then stay safely in the rear, to check out how things turned out.
Remember that this was the first war NAP was in, and by 1382 he was only about 22 years old. However, this guy instinctively knew that the only way to become an effective tactical leader in medieval times was to lead from the front line.
And from this moment on, he started gathering around himself a group of guys not only loyal to their national cause, but also personally devoted to him. And the next time the order "charge!" was given by NAP, there was a race between all of them, but a race to see who got the privilege to be the first in the fray!

Following the incident I described, this guy started asking his older brother to give him permission to leave Lisbon and travel to the portuguese border with Castille in the province of Alentejo, since a great battle between both Kings (whose armies were facing each other) was expected there at any moment.
However, his brother (and for all purposes, military superior) denied his request in the most assertive manner, and had spies watching his every move to prevent his hot head younger brother to desobey his orders.

Well, that did not work out, since NAP went anyway, followed by a small group of knights.

Upon his arrival, events took an unexpected turn, since apparentely no one was much in the mood for fighting.
The wife of the King of Castile died prematurely, and the Portuguese King immediately offered the hand of his daughter in marriage to him, to seal a brand new alliance.
His 10 year old daughter, by the way.
And the strange thing is that the Castillian King accepted that, and people from both sides started a joyful celebration as if they had not been bent on hacking each other to death just a few moments before.
It seemed NAP was one of the few that was not at all happy with the way things turned out, and he thought it best to let everybody know how he felt about it.
During a formal reception to celebrate the engagment between the (poor) bride and groom, with the presence of both Kings and all the highest officials of both Kingdoms, NAP came close to the royal presence and unexpectedly kicked down one of the tables, full of food, wine and precious cristals.

The noise made everybody freeze and look in NAP's direction. Right then, he made a bow to his King and calmly withrew his person from the reception, with every eye on himself.
The Castilian King, after inquiring who he was, said something like this: "a man that dares this, has heart for much more".

He did not know how right he was at the time, but he would find out soon enough, as so will you guys, if you stick around to follow the next episode of this (wonderful...) Series!