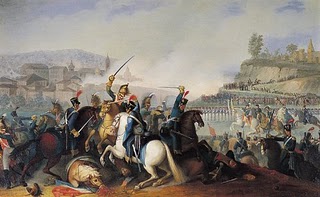 Yes, I already know this post is not out on schedule...
So, what is the problem? There are only about four-and-a-half guys that actually read this stuff, anyway!
On the other hand, since I am the guy in charge of making this (wonderful…) Series, I have recently changed the rules around here. The new rules now allow me to post this whenever it suits me (it’s the reverse effect of having made the decision to register in College again, to get a Masters degree) – just to let you all know about it.
Where did I really left off last time?
Oh, I remember now, I was telling you something about WW’s financial problems.
Well, it so happens that this guy, as a true English gentleman, had above average social needs. His uniform and general clothing had to be tailored by the best professionals in the business; his horses had to be thoroughbreds (or almost); he had to lend his less well to do friends money; his personal servant also had to have the proper appearance of a gentleman’s servant, and so on.
And how in Heavens name could a poor old Captain in the British service afford to meet such expenses with his meagre salary?
The short answer is: he could not.
The solution? Very simple: good old Papa and good old Mama!
That’s right folks, our hero periodically had to remind (by letter) his parents of their responsibility to maintain his (WW’s) social standard. In fact, how could he live around Ministers and Generals looking like a beggar?
This is a very funny part of WW’s story, and as such similar to the stories of countless “Sons & Heirs” in the British service, during the Peninsular War.
During the year 1810, namely during the months of July and August,  WW brings us a very colourful description of his activities on the Portuguese frontier with Spain, near the border fortress of Almeida, in the vicinity of which the allied (Portuguese-British) army was stationed and waiting for the invading French army led by Monsieur le Marechal Massena.
After the fall of Almeida on 28 August 1810 (due to the infamous explosion of gunpowder stored in the medieval castle, extant inside the fortress), the allied forces started their retreat to the Bussaco position. However, WW was not there for the subsequent battle, since the exposure and hard life he endured in the previous months took its tool on his health. In fact, because of that he was eventually forced to return to by the end of the year, where he recovered under the care of his family.
By May 1811 he was back on the saddle and was very appreciative of the outlook and state of readiness in which he found the Portuguese army, by now a proven force for the French Imperial army to recon with.
On the other hand, WW complains a lot about the general incapacity and impecuniosity of the Portuguese government, meaning to state that most things worked fairly well not because of it, but in spite of it.
Isn’t it funny how some things never change around here (government wise…) ?
Our hero continued to serve in a manner agreeable to his superiors and was never shy to cross the front line when needed.
He was present at the second siege of Badajoz (March-April 1812) and in the battle of Salamanca (22 July 1812), where he witnessed the wounding of Marshal Beresford.
After this period, WW received an appointment as Staff officer to the , and proceeded there in early 1813. And that was the end of the Peninsular War for this guy.
In my opinion, WW was not only a gentleman but also a gentle man. Any prolonged exposure to the rigours and atrocities war inevitably hardens any character, and WW was no exception.
However, his letters  reveal a guy that, nonetheless, devoted a caring attention to his family back home and his friends in the field, and was also capable of feeling sorry and lending a helping hand to his opponents, when, for instance, he found them wounded or prisoners of war.
And, once again, here we are on the verge of another challenge! Who will dare guess the name of Character nº 7?
I will pretend some of you really care about this and let you know that the initials of his name are “N”, “A”and “P”. He was a relevant figure in the XIV century with direct influence in southern European affairs.
Since the guys from Australia were not able to meet us in Lisbon (as suggested in my post from 15th October), I am ready to offer them a chance to win a valuable prize if they guess correctly the name of the next character. The prize will be the DVD "The Book of Eli" (delivery by Amazon).
I have good news for you: there is no prize involved for me if you lose this challenge - yes, JMM, this is for you since you are the only guy that cannot sleep at night in fear of losing a challenge.
The good news is that Peixoto has offered himself to paint my DBA Crusader army!
This proves that wining and sobbing in public (for someone to paint my DBA armies) really pays off!
YEEEES!
PC
Publicada por Jorge Faria à(s) 10:50