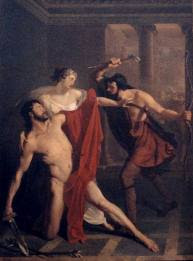 Those that have the will and the good fortune to be able to follow this outstanding Series have surely noticed that last Friday's deadline is long overdue.

There is a simple explanation for this: Peixoto did not deliver my well deserved prize. In fact, he did not even bother to reply to my unselfish proposal. That's o.k. Peixoto, I do not hold this against you. I know you had temperatures of about 40º degrees in Coimbra these last few days, and a guy your age must be having trouble holding his brush, let alone paint his way around...

I am sick and tired of writing about this AL guy. It is time to finish him off.

By 411 B.C. AL was ready to pursue his personal agenda, and Sparta simply was not part of it. You remember (...) I mentioned in my last post that Tissaphernes was the representative of Darius II, of Persia - known to the Greeks at the time merely as the "Great King". As a Persian Satrap, Tissaphernes was the holder of considerable civil and military power, therefore, this was the guy AL needed to get on his side. A simple thing for a man like him.

His charming personality, combined with a new found taste for an opulent and luxurious lifestyle did it for him (his previous spartan way of life was quickly discarded). Tissaphernes was thoroughly impressed and agreed to follow AL's advices in matters related to the conduct of the war. At the time, Persia was more or less allied with the Peloponnesian League, since that option gave her a perfectly good excuse to nibble at the Athenian possessions in Ionia. The Persians had agreed to pay every expense related to the maintenance of the Peloponnesian fleet in Ionia, therefore giving them a considerable operational edge against the Athenian fleet.

AL would have none of that. He proposed that Persia started delaying the necessary payments, in order to cause instability in the Peloponnesian ranks, so that the war could be prolonged and result in the exhaustion of both opponents, allowing Persia to easily "pick up the pieces". This objective was easily achieved, since several riots immediately occurred, caused by the lack of payment of salaries and the availability of supplies. And AL started using his new found influence on Tissaphernes and Persia to achieve his personal objective: his return to Athens.

His influential friends in Athens and with the Athenian fleet, stationed in the island of Samos, combined with his usual intrigues and shallow plots did the trick. In 411 B.C. AL became once again a General on the Athenian payroll. I can only imagine his attitude if somebody asked him about his late friends, the Spartans. "Spartans, who?", would be a probable reply.

Never mind if this fact had contributed to the (temporary) overthrow of the democratic regime in Athens. After all, that was only a small thing, compared to AL's well-being. In 407 B.C. AL even received a spectacular hero's welcome on his return to Athens, following some military successes (namely, the battles of Abydos and Cyzicus).

But this was the beginning of the end for AL. The fickle Athenians did not accept the defeat of the Athenian forces in the battle of Notium (406 B.C.) and did away with AL, exiling him, never to return to fair Athens.

In 404 B.C. he was, naturally, assassinated (by Spartan influence, as some say).

What a Character, this guy! Woe to the people that let themselves be lead by guys like AL. However, examples such as this are recurrent in History. The instrumentalization of entire countries and societies to the will and ambitions of a person or a group, are recurrent. Just remember these words from Napoleon: "A man like me troubles himself little about the lives of a million men."

One would expect that after thousands of years, the human race could have learned something regarding this. However, not even today we can say that the learning has been made...

Ok. Now I have had enough writing about Statesmen and Generals, in this educative and marvelous Series. My next post will show you how a "John" like you and I can deal with getting involved in the business of war. And, once again, I know for a fact that there will be a (one man...) race to discover his name!