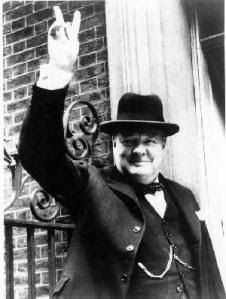 Character Series nº 1 - Winston Leonard Spencer Churchill
(Part IV)
(The Sudanese War - Omdurman - continuation)
Our hero arrived in Sudan just in time to take part in the decisive phase of the campaign, from early August to September - and just in time to earn his much coveted medals.
WC was assigned to A squadron, 21st Lancers. That unit left Cairo to Sudan on 3 August. As his weapon, he chose to use a non-regulation Mauser semi-automatic pistol (with a 7.63 calibre and a ten-round magazine), that was very effective at close range (he called it "ripper"). Due to an accident in India, WC's right arm could not handle a sword or a lance.
After a more or less leisurely march of about 1.400 miles under the pleasant African sun, the British and allied Egyptian armies (all 22.000 of them) finally met the army of the Khalifa (of about 52.000) on the 2 September 1898, at the killing field of Omdurman.
Early in the battle, the 21st (440 strong) was involved in a desperate but ultimately sucessfull fight with a concealed Dervish unit (of about 2.600 men), that was later the cause for the award of 3 Victoria Crosses and 7 Distinguished Services Medals to members of the 21st Lancers. This was also the time when WC used his "ripper" to good effect, although I think the Dervishes might desagree with me regarding the use of the adjective "good".
Once again, our Character behaved his usual self in combat: indifferent to danger and coolheaded, while actively seeking to distinguish himself in action. As you all know, this battle was a resounding sucess for the British and the Egyptian allied armies. They suffered about 500 casualties, while the Dervish army had about 26.000 casualties (dead and wounded) with more or less 5.000 prisoners.
WC's already typical arrogant attitude surfaced when he said of Kitchener: "He is a great general but he has yet to be accused of being a gentleman", regarding his rough treatment of prisoners and other random atrocities. Naturally, this kind of attitude did not favour him with him commanding officer.
He got two medals from this adventure in Sudan, besides the (much sought) personal publicity derived from his letters about the campaign, published by the Morning Post. In December 1898 he was back in Bagalore, after a "vacation" of about six months.
(Conclusion)
By 1898 WC was 24 years old and had already seen war in 3 Continents. After this he had a very colourful participation in the South African War and later on also participated in World War I - where the German steel marked the end of the association of glamour to war - at least in the British imaginary.
D.H. Russel said it best, when he concluded that WC had that "optimistic, invencible attitude typical of the young Victorian-era officer". In this our hero was not different from the many hot-headed youths that through the ages were born within powerful Empires and were determined to make a name for themselves and achieve a powerful political and/or social position by demonstrating their mettle in battle - we can see this at least from the Roman Empire onwards.

We all know the role WC played in WWII, as the leader of Great Britain. Looking at his personal history we can understand why he managed to inspire his fellow countrymen to fight and resist to the last.

This was a guy that really "walked the walk", as he several times proved, with and without a uniform. Did you know that he wanted to accompany the British fleet on D-Day to the Normandy? Only the personal intervention of the King George VI prevented him from doing it.

That is why, unlike Chamberlain, Hitler did not manage to intimidate him. WC was tougher than him. If this guy said something like "bring'em on!" I am sure nobody would feel inclined to giggle.

I mentioned in my first post WC's aristocratic background. That fact, true enough, cleared a lot of the way for him and gave him easy acess to indispensable and important personal and political connections. But he was also a self-made man - no doubt about it. His ambition, fearlessness and intelligence did it for him.

Do you know a guy in politics nowadays with his pluck?

All things considered, there could not be a better Character than Winston Churchill to start this truly wonderful series of military history posts. I cannot but reach that conclusion, taking in consideration the overwhelming number of favourable comments that, from all over the world, arrived at our comment box.

Who will be Character nº 2 (I can almost hear all of you asking, in nervous anticipation) ? Well, all I can tell you is that he is not English. In fact, if any of you guesses his name I am prepared to offer him my brand-new-state-of-the-art Mongol army. Can there be a better challenge than this one ?

All I can say to help is that his name starts with a "V". Sorry for not helping you much more - I like my Mongol army...