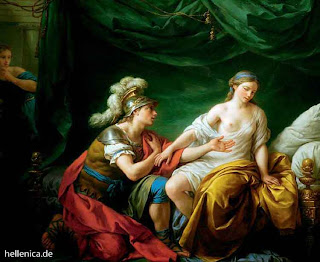 Character Series nº 3 - Alcibiades
(Part III)
The good news: I have a perfectly good excuse for missing the last two deadlines for posting this wonderful and well researched historic text - I was enjoying a vacation in a land "Far-Far-Away-From-The-Office" (and it is only in my office that I can find inspiration for doing this, and a good reason for doing no work at all).
The bad news: The vacation is over.
Now that I got this out of my system, I can proceed with the story of good old AL.
(The Sicilian Expedition)
Those of you that bothered to read my last post noticed that at some point in the Peloponnesian War, AL managed to get himself a nomination as military commander of the Athenian forces. And together with Nicias and Lamachus, our boy AL was one of the leaders of that strange military endeavour known as the Sicilian Expedition, which took place between 415 and 413 BC.
As always, Thucydides gives us a very interesting insight of the motivations behind this endeavour, and how at that time (as nowadays) men usually manage to use reason and logical arguments to justify the elimination of the dangers inherent to a course of action they most prefer and resort to the most absurd and illogical considerations to justify their preferences.
This was precisely the case, regarding the Sicilian Expedition, where the Athenian Empire made full use of its resources and allies to organize a magnificent and well equipped fleet and army (the largest ever organized by a Greek city state), in what (in their mind) promised to be a military promenade to distant Sicily, without due regard to the numerous and powerful enemies they still had right in their backdoor - The Spartans and their allies.
And AL played his part in justifying this adventure.
As usual in such cases, his motivations where - without a doubt - purely selfish. This guy was used to a lavish and luxurious life style, and that particular expedition promised to become a fountain of gold and silver - for him. Once a guy starts reading about historic events related to war, mostly, if not always, there is this common denomination: there is always someone set to make a huge profit from war, without the minimum regard to the pain and sufferings caused by it to thousands or even millions of human beings.
And, also almost invariably, this objective is disguised under patriotic, religious or other "political correct" motives, that help motivate the masses to the slaughter.
It so happens that in this case AL's objectives were frustrated - by his own doing. Just before the expedition started, someone thought it would be fun to decapitate the Hermai (plural) extant in Athens. The Herma (singular) were stone sculptures with a human head above a plain squared lower section, that also had male genitals carved at the appropriate height. These sculptures had a significant religious and social meaning in Athens at the time and the decapitation performed on the lower head (...) of the sculptures caused much consternation.
This (together with another episode called the violation of the Eleusinian Mysteries, also imputed to AL) caused some serious uproar at the time and, in my opinion, this is also just the sort of thing that good old Al would do just for fun, while on a drunken rampage - although he denied it at the time. Just remember the facts (I only mentioned some) you read about AL in my first post, regarding his idea of fun.
Well, since AL had the full support of the fleet/army at the time, his enemies in Athens did not manage to prevent him from setting sail to Sicily. But they started his public trial just after the departure of the military forces and AL was convicted in absentia and sentenced to death. A special trireme was sent after the fleet to find him and bring him back to Athens to face his fate.
However, AL was not a man that was ready to face a fate he could not influence. Therefore he got the "Hell out of Dodge", before anyone could catch him.
Can you guess where he went and hide ? To Sparta!
And the strange thing is that they welcomed him!
Once again, in time those poor Spartans would have serious reasons to regret that merciful act.
I will tell you all about it...one of these days.
PC